Rathmore Grammar School at Finaghy, Belfast is steeped in history – originally a 19th Century convent, the school redevelopment is one of several which AG has been involved in. Many of the facilities, including the landscaping around the school, required much improvement.

When the decision was made to construct a new school in 1997 there were already several classes accommodating in mobile classrooms, whilst the convent itself and the surrounding grounds lay in a state of disrepair. After the commission was won, construction began in 2002 with the last few additions to the project seeing completion as recently as May 2006.

One of the most distinguishing features of the building is the new courtyard, housing the school auditorium.

Utilising AG’s TerraPave® Flags (400×400) in Rimini colour and Country Cobble setts in Slate, the checkerboard pattern achieved through using these products has helped distinguish the courtyard and school grounds, and separates the design from the mundane. The contrast provided against the mixed render and timber cladding of the auditorium also helps to ‘lift’ the overall design visually. The paving products used help to maintain a perfect harmony with the traditional materials previously used in the listed convent.

A semi-circular area at the front of the auditorium defines its entrance and provides an attractive yet complementary surfacing, whilst connecting back to its traditional origins. Indeed, the combination of these products was used for the remaining walkways surrounding the school.

Overall, Rathmore Grammar school and its surrounding landscaping are compact and logical, and have managed to successfully combine modern materials with traditional design. The project has also received notable recognition within the industry including an ‘Award of Merit’ for the quality of the landscaping used from the Association of Landscape Contractors (ALCI). 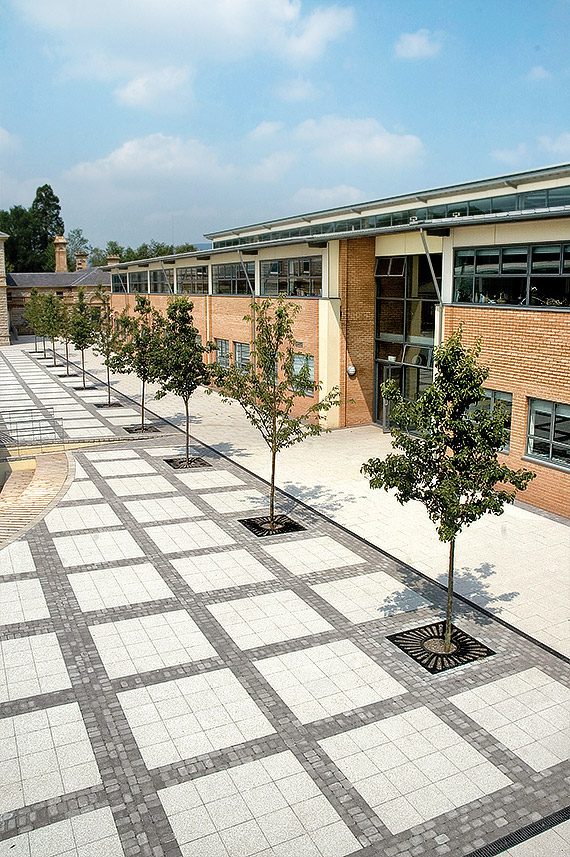